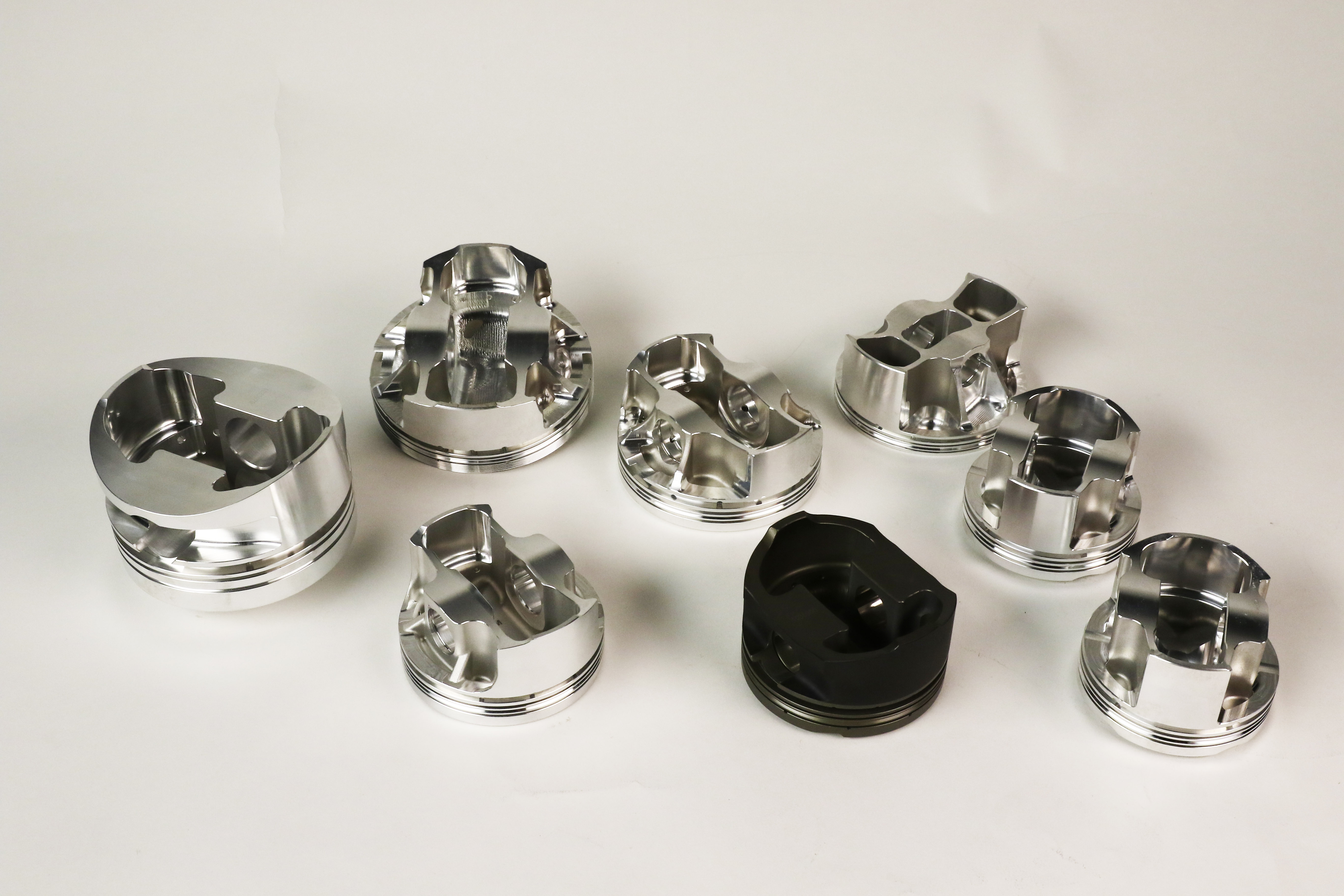 Piston skirts are a critical engineering feature that dictates much about how a piston will perform on the job. Understanding and selecting the right skirt design can be worth horsepower and longevity for your engine.

It may come as a surprise, but it’s quite likely the pistons in your engine are not particularly round. Well, parts of them are mostly round and other parts are not. It’s complicated, but for good reason. A piston’s operating environment dictates its overall shape and that form evolves to complexity when the piston is asked to perform multiple tasks while enduring ongoing abuse of the highest order.


The piston’s primary job is to capture cylinder pressure via ring sealing so the connecting rod and crankshaft can convert that pressure to rotary motion to drive the vehicle. Pistons don’t really know if they are coming or going, but they do recognize factors that conspire to destroy them or otherwise render them less effective than desired; said factors being heat, pressure, friction, lubrication and inertial loads that constantly strive to tear them apart.

The upper portion of most pistons is indeed round because that is the part that holds the ring pack and round rings must match up to round cylinder bores to achieve proper sealing. Some exceptions do have ovality on the ring lands, but it is not mainstream practice. For the most part, everything above the bottom ring land is in fact round. Below the ring pack however, modern pistons assume new and different shapes whose subtleties are not always clear to the naked eye.

Piston skirts are necessary to stabilize the piston in the bore and promote the best possible ring seal by preventing the piston from rocking too much. Combustion forces result in significant side loading through the skirt which tries to deform the piston and cock it in the bore. Without skirts the ring pack would essentially represent a single point of contact allowing the piston freedom to rock and compromise critical ring function under both compression and combustion events. By adding a skirt, designers effectively create two areas of contact that improve ring seal and absorb thrust loading while stabilizing piston motion within the cylinder bore.

In performance circles piston skirts are typically recognized as either full skirt (full round) or slipper skirted. Symmetrical or asymmetrical skirt profiles further characterize slipper skirt designs with attending ovality and barrel profiles specific to any given design. Full skirting seemed logical in the early days. It created a robust piston that maintained its designed shape and held up well to extended abuse.

These pistons typically utilized outboard pin bosses, longer wrist pins and had considerable mass. Full skirting is useful where combustion pressures and thrust loading are extremely high as in a diesel engine. It helps to maintain piston shape and stabilizes the ring pack under these conditions. Full round skirts last longer due to less localized wear and a larger skirt contact area.

Slipper skirt designs evolved as engineers sought to lighten reciprocating components to improve performance and adapt piston designs to accommodate stroker engine combinations and the elevated engine speeds of many modern performance engines. While skirts are necessary to ensure piston stability and alignment, redefining the piston below the ring pack would lead to numerous advantages some of which include:

As new shapes evolved, designers employed substantial tweaks that significantly improved performance, chief among them, ovality and barrel face contouring. Both have been a staple of piston design for more than half a century.

Designers long ago realized that full skirt contact with the cylinder walls was not only unnecessary, but detrimental to performance in the form of power robbing friction. Piston ovality or egg shape if you will, dictates that the piston body is narrower along the minor axis (piston pin) and broader along the major axis (thrust surface). In terms of skirt width, the widest part of the piston is in the load bearing area of the skirt. That’s why we measure piston-to-wall clearance at the center of the skirt and toward the bottom of it. Ovality is used to address piston expansion from heat. It brings a controlled one-dimensional solution to the amount of contact the piston has on the thrust face. And it offers the strength you would expect to be missing from the removal of a full round skirt. FSR (Forged Side Relief) skirts are actually stronger than full round designs, but they require more fine tuning of the skirt profile to match full round wear characteristics.

The degree of ovality is dictated by the amount of thermal expansion and thrust loading engineers expect the piston skirt to encounter. The precise geometric shape varies according to application. Only a portion of the skirt contacts the cylinder wall even though it is surrounded by more skirt material. The intent is to present the carefully calculated load bearing area best suited to each application. Normally aspirated pistons require less ovality than supercharged and other artificially boosted applications due to the varying heat and loading requirements.

Pistons may incorporate single ovality or compound ovality based on application, loading, thermal characteristics, piston material and the thickness of the skirt. The shape can be surprisingly complex and is only arrived at via computer analysis and real-world dyno testing. Instead of one consistent curve, the degree of curve may change as you approach the load bearing area. Engineers can calculate this and simulate it on computers. Ovality shapes are cam-ground on special machines, but the process was time consuming and expensive. Today, CNC machining centers can cut these shapes much faster and more accurately.

If the concept of ovality doesn’t make your head spin, barrel contouring might. While ovality directs skirt shape on the horizontal axis, barrel addresses skirt shape on the vertical axis and helps support the single point of skirt contact required for maximum skirt efficiency.

If the load bearing area has width, it must also incorporate height which defines the exact contact patch the engineer deems appropriate for the application. Again, this can be calculated and simulated, but it must be validated by actual testing. To visualize barrel, imagine a side view of the piston skirt and select the widest part of the piston where piston-to-wall clearance is measured. In many cases this is approximately one inch down from the bottom ring groove.

From this point, the piston skirt also assumes a curved contour as it follows a defined arc to the bottom of the lower ring groove where the piston is in fact smaller in diameter.

Recall that the ring belt and the top of the piston are always round and smaller in diameter because they require more room for expansion due to high heat in that area. Below that point, the barrel works in conjunction with ovality to define a multidimensional point of contact and load bearing area best suited to the final application. To some degree you can think of barrel as a type of vertical ovality as it is intended to minimize friction by controlling the contact patch.

It may be useful to imagine a small balloon being inflated in the cylinder. Contact with the walls changes with inflation pressure but it can only change so much horizontally before the entire surface of the balloon contacts the cylinder wall horizontally. However, the balloon can still expand vertically and the arc to the contact point will change and lengthen the contact patch.

In a sense that is barrel because the shape of the balloon always arcs away from the cylinder wall at some point. In practice, the barrel is slightly more pronounced at the top of the skirt near the oil ring groove and less at the bottom of the skirt; the difference being on the order of .002-.004-inch.

Most pistons, whether full round or slipper skirted are symmetrical in skirt contour; that is, both skirts are identical in size and profile. When you look at one of these pistons you cannot observe any discernible difference between the minor thrust skirt and the major thrust skirt.

Most pistons are made with symmetrical skirts, but a different type of piston skirt pioneered and popularized by JE Pistons offers significant performance gains by altering the skirt design on the minor thrust side of the piston. The major thrust side retains the traditional style skirt with ovality and barrel characteristics appropriate to the specific application. The minor thrust side however, has a notably smaller skirt just large enough to still provide the stabilizing contact patch, but not as broad and robust as the skirt on the major thrust side. Because it is not subject to the higher thrust loads it can be reduced in size to reduce piston weight and frictional losses.

Need JE Pistons for your car? See them all at the source.

JE asymmetrical pistons use a forged-side-relief design (FSR) with major and minor thrust skirts, inboard pin bosses and a shorter and stiffer wrist pin. Over the years, the skirt designs were tweaked, sometimes significantly, as designers refined their function according to changing performance requirements. The primary focus of the asymmetrical piston design is weight and friction reduction via the FSR’s smaller, lighter skirt on the minor thrust side. A key design benefits of the asymmetrical piston is the shorter and lighter piston pin. On a Chevy LS engine, the piston pins are only 2.250 inches long, reducing piston weight by up to 10 grams.

Does this throw the piston out of balance, relative to the pin position? The answer is no. The combination of lighter pin and pin offset keeps the piston balanced. JE offsets the pin toward the major thrust side making the balance of the piston on the pin axis almost ideal. So, the smaller skirt has no effect on the balance unless you grind on the piston yourself during balancing.

This should be unnecessary since the pistons are manufactured as balanced sets. Each piston is different and will have its own unique skirt profile based on application and verification of anticipated loading.

Engineers have a pretty good handle on this, but they will still test multiple skirt profiles, often in the same test engine to gain a real-world picture of how the skirt handles its requirement.

The engine’s stroke, rod length and maximum cylinder pressure all contribute to any given skirt requirement. Supercharged and nitrous applications also play a factor and will normally have a very robust skirt on the major thrust side.

In addition to ovality, barrel and skirt symmetry considerations the forged-side-relief configuration lends considerable strength to the skirt profile as it concentrates the greater mass of the piston toward the center and behind the major thrust surface. Piston are one of the few engine parts that incorporate multiple shapes and sizes that merge into an overall profile best suited for any application.

The greatest gains in friction reduction are typically realized via strict engineering protocols that define skirt profiles to meet the wide variety of performance conditions encountered in motor sports. As ring packs have evolved to thinner rings, the skirt contact patch became the final frontier of frictional challenges. By combining some, or all the available skirt shapes, designers have been able to reduce friction while improving piston stability and ring function.  That translates to greater performance and component durability for all racers. 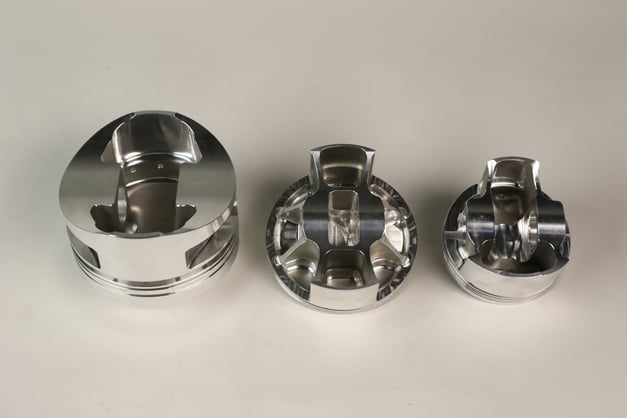