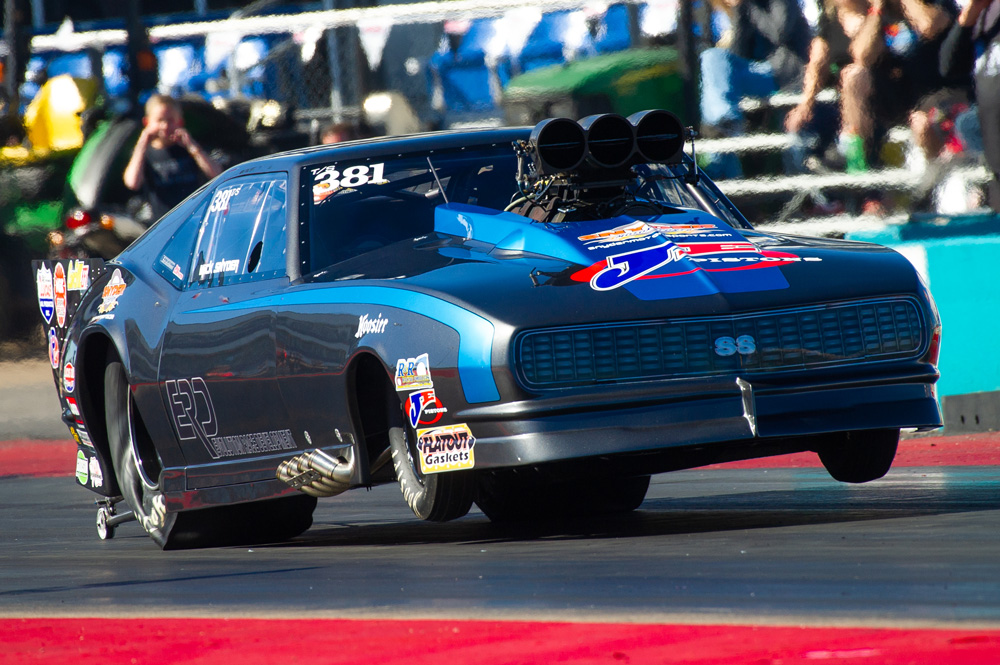 “I run a blown Hemi with EFI on it,” explains Mick Snyder of Snyder Motorsports in Cresson, Texas. “It’s kind of a unique deal, and it’s one of the setups we now focus on at the shop. But we’ve done a little bit of everything over the years here – we started back in 1994 with Junior Dragsters, which is where I started racing. And as I moved up the ranks into the bigger cars, the business progressed along the same route.”

These days when Mick isn’t putting together boosted race engines he can often be found mixing it up in Outlaw Pro Mod as well as the NHRA’s Top Sportsman class, where he took the Division 3 championship back in 2016. The apple doesn’t fall far from the tree, as it turns out, as his father has collected his fair share of victories over the years as well, including the IHRA Super Eliminator championship in 1999.

“After he decided to retire, I basically took over,” Snyder tells us. “That year we were at one of the races, about to make a pass in the last qualifying round. I was kind of crew chief on his car at the time – I went to go get the car ready for the round and there was an oil-down in front of us. While we were waiting, the announcer got on the PA and said that my dad was retiring and that I was taking over. Funny thing was, someone had forgotten to tell me about this!”

Snyder would go on to race in Alcohol Dragster for a few seasons before moving over to Alcohol Funny Car, later transitioning to Pro Extreme before landing in Top Sportsman, racking up victories all along the way. “In the Funny Car we won three championships, then we picked up a championship in Pro Extreme, and then when I moved over to Top Sportsman in 2015, we won the championship the following year. It’s been quite a ride – this’ll be my 26th year racing.”

Top Sportsman is a bracket class that caps ETs at 6.00 in the quarter mile, but the restrictions on how racers can generate power are pretty flexible. “You can’t have a screw blower, but you can have a Roots blower, nitrous, a naturally aspirated setup, etc. And in terms of cubic inches, they don’t care.”

That flexibility means that in a highly competitive class like this one, teams need to stay on top of their game if they want to keep finding their way to the podium. So after eight seasons of successful racing behind the wheel of the team’s ’63 Corvette, Snyder decided it was time to change things up. “The Corvette was getting a little bit worn out,” he says. “It probably had 700 passes on it, and it was getting to the point where I knew I was either going to have to invest a lot of money in it to fix it up, or just start with something new.”

Snyder chose the latter, initially with the plan of putting something together from ground up, but problems with a builder soon had him looking to alternatives. “I found this car and it was one of those situations where the car was an ’05, but it had hardly any passes on it,” he says. “It had been raced for two seasons and then it just sat – it was basically a backup car for this team. So we got it and took the whole thing apart and started from scratch – I think we got a hundred pounds out of the car just changing over from the old-school stuff to the modern equivalents.”

One of the championship-winning Corvette’s secrets to success was its Hemi powerplant and the unusual pairing of a Roots blower with EFI, a combination which made the jump to the new Camaro. The 477ci Brad Andersen block sports a Bryant crank, rods from R&R Racing, JE pistons, a Bullet Racing cam, a set of cylinder heads that Snyder Motorsports put together with the help of Visner Engine Development, and the aforementioned combination of a Chuck Ford 14-71 supercharger with ComSYNC EFI.

A mill like this one – which makes in excess of 3,000 horsepower – requires components that race teams can trust to withstand the abuse, which is why Snyder Motorsports opted for JE slugs in this application. “We’ve been running JE pistons since our small-block days, around 1998 or so, and we’ve had great luck with them,” Mick notes. “These days we use a custom spec – this car actually has new pistons that we designed at the beginning of this year. And with the EFI system we’re using, we should be able to run the same set of pistons for a whole season before we cycle them out.”

Mick says that while the team has been anxious to compete this season, other demands have made it tough to get to the track as often as he’d like to. “This year we’ve been out three times,” he says. “It took a while just to get the chassis setup right, but by the third outing we had it all figured out – it goes straight and carries the wheels pretty good, so it’s kind of fun to drive. So far it has been 3.87 @ 190 mph, and its 60-foot is already way better than the Corvette ever did. It’s also trapping higher than the Corvette, so as we really start to dial this thing in, it’s going to be way faster than the Vette. I’m pretty excited.”

The team recently moved from Indiana to Texas, which one of the reasons the car hasn’t seen as much track time as Mick would like. But now that the dust has settled, he says the race calendar is filling up quickly. “Supposedly we can actually race this thing year-round down here, as opposed to Indiana where it starts snowing and you’re done. So I plan on racing in some of the local Quick 8 stuff, as well as the Ironman series and the NHRA Top Sportsman events. But these days we go to the races we want to go to rather than the races we have to go to. If everything works out as planned, we expect to get out to 10-15 races this year.”

While Snyder isn’t so worried about points these days, he isn’t ruling out another run at a title. “It if works out where we’re winning races at the divisional level and we’re near the top of the points, yeah, I’ll go chase a championship,” he says with a chuckle. “It’d be cool to have a sixth one!”