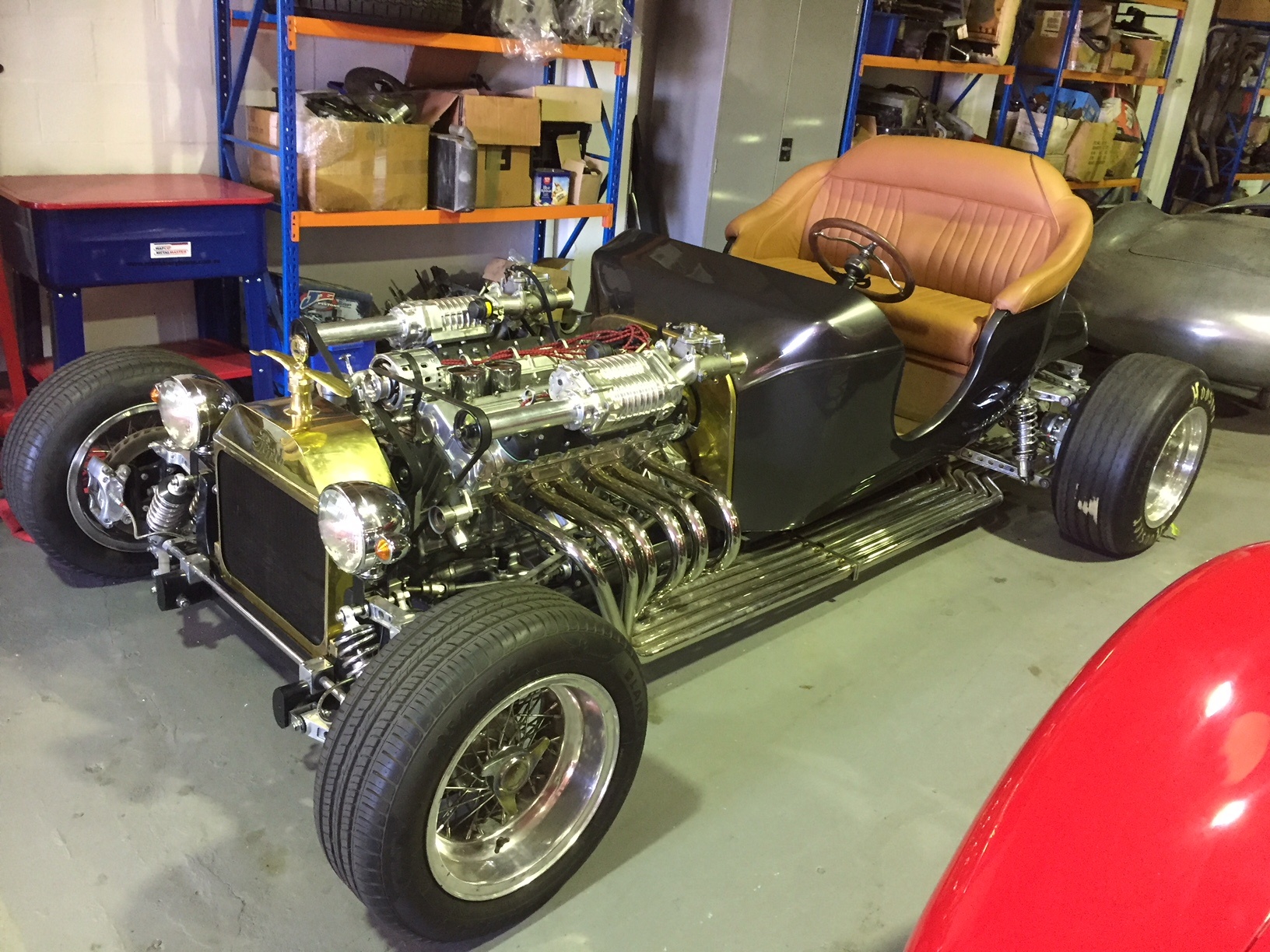 In a world where everything's just about been done, it takes something extraordinary to stand above the crowd. Gerry Duyvestyn’s Ferrari-powered T-bucket fits that bill.

Gerry Duyvestyn’s fascination with all things automotive took hold early on. “It was a childhood affliction,” he says with a laugh. “We had a breakfast cereal with all these different cars in it, and pictures of all the latest exotics. From the first time I had that cereal as a kid I was absolutely in love with cars – particularly the Dino.”


Today Duyvestyn is the owner of Forza Automotive, a shop in New South Wales, Australia that specializes in the restoration of vintage hardware from the likes of Ferrari, Lamborghini, and other high end European marques. While wrenching on vintage Italian sports cars certainly seems like a logical outcome for a kid who was obsessed with Ferraris from an early age, it wasn’t Duyvestyn’s initial trajectory.

“My first job was as an aircraft engineer for Qantas,” he explains. “I was with them for nearly thirty years. But cars were incredibly important to me throughout that period, and it was a fantastic basis for learning all the different aspects of restoration though aircraft maintenance and rebuilding. I was also fortunate enough that I found the car of my dreams when I was a kid. At 21 years old, I was driving around in a Ferrari Dino 246 GT.”

But like any vintage Ferrari, Duyvestyn’s Dino needed regular attention and often required parts that were difficult to source. “Initially I started looking all around the world for spares, which was always an issue,” he recalls. “Through all the traveling I did with Qantas I made a lot of great connections with parts suppliers. And over time what would inevitably happen is that, where ever I went in the world there was some dilapidated Ferrari or Lamborghini there, and I’ve always felt it was my obligation to resurrect these things.”

While the shop currently houses the kind of projects you’d expect from a vintage exotic restoration outfit – like a Bugatti Type 55, a Lamborghini Countach LP400 S, a Ferrari 365 California, and Mario Andretti’s Ford-powered March 701 Formula One car, among others – there’s one project that stands out, even among this storied lot. “Hot rods aren’t really on my radar, normally,” Gerry says. “But one day my friend Bill Young at GT Car Parts in Phoenix, Arizona sent me an email with a photo of this twin-supercharged, fully polished Ferrari V12 engine. On my next visit to his shop, I saw the engine sitting on a palette and asked him about it. He told me it was an unfinished project from Bob Reisner, a well-known American hot rod builder, and that there was a whole car that went with it.

He showed me some photos of the rest of it – it was only partially built, but the chassis and body were more or less all there, and there were a bunch of fabricated suspension pieces too. While I was rummaging around look for parts, Bill called me into his office and said, “Hey Gerry, you wouldn’t believe it – the guy that ended up with Bob’s project says he has to sell this car and get it out of storage immediately.” So I went straight over and bought it.”

While the car has the look of a Ford T Bucket, it’s actually a full Ferrari chassis underneath that’s been paired up with a steel Ford body mounted on top. The twin-cam, all-aluminum 5.0-liter V12 engine comes from a Ferrari 400 GT and was built largely to factory spec. Matched up with a pair of blowers that Duyvestyn says are of unknown origin, he estimates the power plant is good for about 700 horsepower. The V12 is backed by a modified TH400 gearbox.

“We initially had plans to run EFI,” he recalls. “But in sort of keeping with the period, one of my engine specialists recommended running the car with a set of large Weber carbs on the induction side, as it would present very few tuning problems. We weren’t chasing horsepower or planning to build a drag car out of it – it was more about having it run reliably. So we ultimately decided to go that route.”

The suspension system has some hot rod cues as well. “Instead of using the steel Ferrari factory suspension arms, Bob fabricated them out of billet aluminum.” With a healthy use of aluminum throughout, a trimmed down chassis, and a light weight body, the car is substantially lighter than the Ferrari it’s based on. Duyvestyn says that while he hasn’t put the car on scales, he wouldn’t be surprised if it was under 2000 pounds. “It is a ridiculousthing,” he quips.

Gerry also points out that JE pistons have been a part of not only this V12-powered hot rod project, but a wide array of his exotic builds as well. “I’ve been working with JE for more than twenty years,” he says. “I probably wouldn’t use any other piston in an engine rebuild. The beauty of having a custom facility like that, where I can just call in and say that I want this size with such and such pin height, etc, is priceless for me. These cars don’t use off-the-shelf pistons, and there’s zero compromise in quality with JE.”

These days the T Bucket is ready to roll for cruise night, but the work is never really done, Duyvestyn says. “I’ve still got like half a dozen little things to do, but at this point I can walk into the shop, turn the key, and head out with it.”

In the meantime, Gerry is staying busy with all the other projects he’s got in the mix – one of which is really holding a lot his attention these days, and for good reason.

“The project I’m working on at the moment, which is probably the most fantastic thing I’ve done in my life, is the “fifteenth” 1966 Ferrari 365 California. Fourteen of these cars were completed, and this is the fifteenth body shell, which comes from Sergio Pininfarina’s warehouse. We’re mating it with a MKII 330 GT chassis, which is the exact correct piece for the car.”

While there’s certainly money to be made with these projects, it’s clear that Duyvestyn has a passion for the process. “I’m the resurrection king,” he says. “I love tracking down the parts, I love fabrication and machining stuff, and love making these cars live again.”