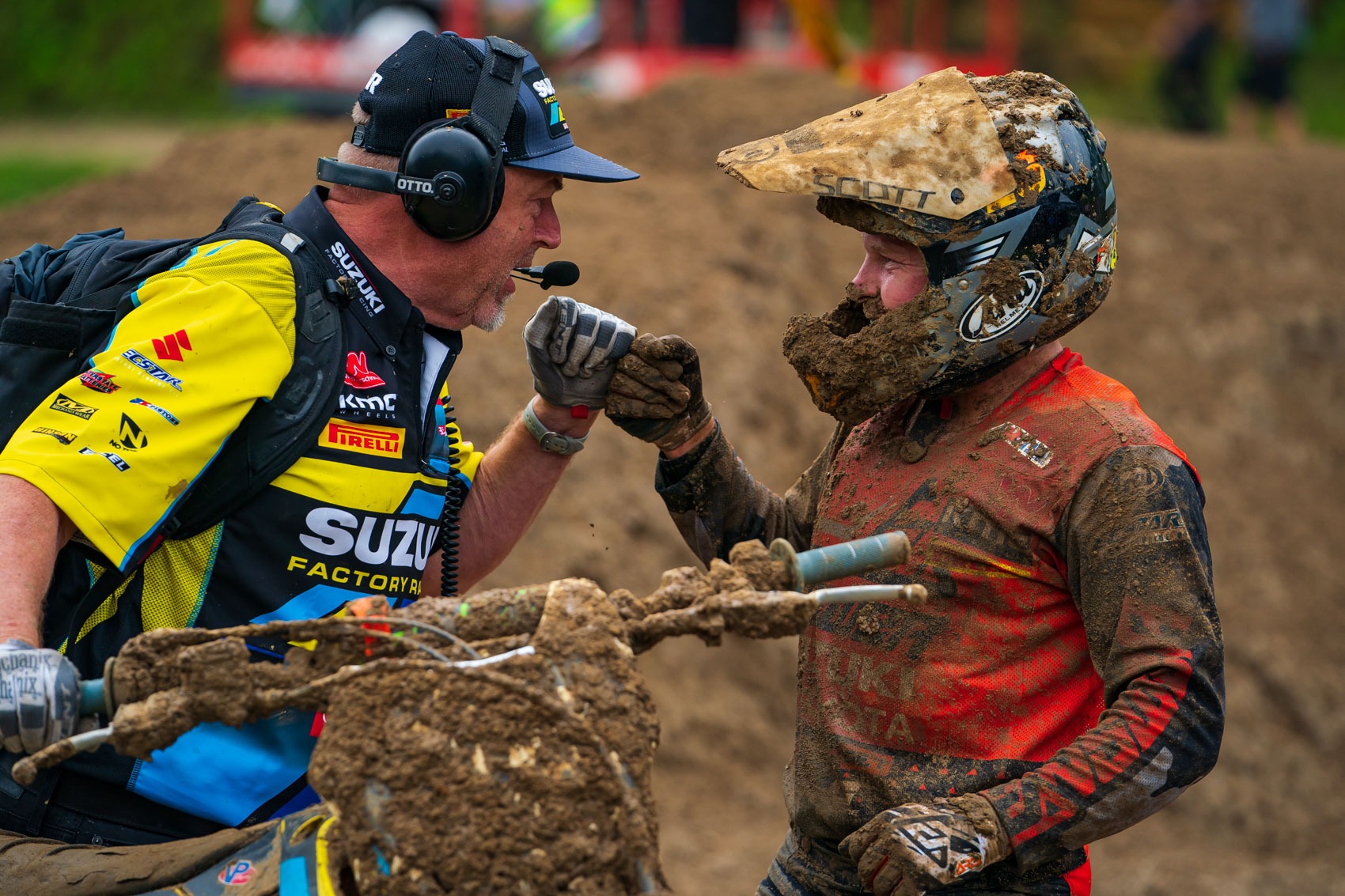 JE Pistons Back on Top at Spring Creek National

JE Pistons powered riders fought through the challenging conditions at Spring Creek Pro Motocross and took the top 2 steps of the podium. Read on for details and (muddy) photos.

Cianciarulo led the charge for Pro Circuit Racing with a combined 3-1 finish to collect his sixth overall victory of the season. Meanwhile, he stretched his championship lead to 36 points with four races remaining in the 2019 outdoor campaign.

Martin, the hometown rider and native of Millville, Minn., rode his JE-powered Suzuki RM-Z250 to an impressive 2-3 finish to come home second overall and earn his first podium finish of the season.

Cianciarulo battled with GEICO Honda’s Hunter Lawrence for the holeshot in the first race of the day, and while Lawrence had the edge after the first corner, the rider of the No. 92 Kawasaki KX250 kept him honest for the first half of the 30-minute-plus-two-laps moto.

As the top two duked it out at the front of the field, Martin eventually found his rhythm and began tracking down Cianciarulo for the runner-up spot. With just over four minutes remaining in the first moto, Cianciarulo fell victim to the muddy racecourse, losing the handle on his machine and giving up second to Martin. With time running out, the 22-year-old Port Orange, Fla., native remounted his bike and held on for third to record his 14th top-three moto finish of the season.

“I just had a little bit of a vision issue,” Cianciarulo explained. “I’ve been with Scott (Goggles) for a long time and their product is awesome, but it just happens sometimes in those conditions. I got a piece of dirt stuck in between where my roll-off was and the top of the goggle. I’d pull the string but it wouldn’t move that piece of dirt, so I ended up having to ditch my goggles and I fell like three times. Hunter rode great and Alex got me there at the end. I was mad after the first moto, super mad. I just felt like I didn’t get as much as I could out of it, but I was able to turn it around for the second one.”

While Justin Cooper grabbed the holeshot in the second moto, Cianciarulo stayed on his rear fender and took over the lead before completing the first lap. From there, he had a clear track and didn’t skip a beat. By the time the checkered flag waved, Cianciarulo built over a 14-second lead to claim the seventh overall win of his career.

“This was one for the books,” said Cianciarulo following Round 8. “I am so incredibly proud of my team and our results. Days like this are where you can easily throw away a moto due to a mechanical (issue) or get swallowed whole by the nasty weather conditions. In the second moto, I was determined to get out front and ride with clear vision and was able to do just that. We were able to increase our points lead a bit and keep working towards that bigger picture, which is all we can ask for at the end of the day.”

Martin, who cut his teeth racing at Spring Creek Raceway, got a solid jump out of the starting gate in the second moto, but his No. 26 Suzuki got pushed wide in the first corner, forcing him off course at the onset. Martin raced in the runner-up spot for the remainder of the second moto but was ultimately penalized one position for the off-track excursion. Still, the JGRMX/Yoshimura/Suzuki Factory rider remained in great spirits and was pleased with his team’s progress.

“Things started off a little delayed at the home race due to weather, but I felt great on the bike right away and qualified third fastest,” said Martin. “The motos went very well, with two second-place finishes, but it was unfortunate to get docked a position in the second moto. All in all, it felt awesome to finally get an overall podium for myself and the JGRMX/Yoshimura/Suzuki guys! I’m very excited with how things have been progressing.”

Martin’s JGRMX 250 Class stablemate Kyle Peters had his hands full with the challenging conditions but soldiered home to a 17-15 combined effort to be credited with 15th overall.

Across the pits in the premiere 450 Class pits, Sweden’s Fredrik Noren carried the JE Pistons colors for JGRMX/Yoshimura/Suzuki Factory Racing, riding a 7-11 effort into a respectable eighth-place overall finish.

The Lucas Oil Pro Motocross Championship returns to the pacific northwest this weekend for the series’ traditional stop at Washougal (Wash.) MX Park.

The first moto from Round 9 of the Pro Motocross Championship from the Motosport.com Washougal National will be televised live on MAVTV Sat., July 27 beginning at 4 p.m. Eastern Daylight Time, 1 p.m. Pacific. Television coverage for the second motos will televised on NBCSN on a tape-delayed basis at 10 p.m. EDT.