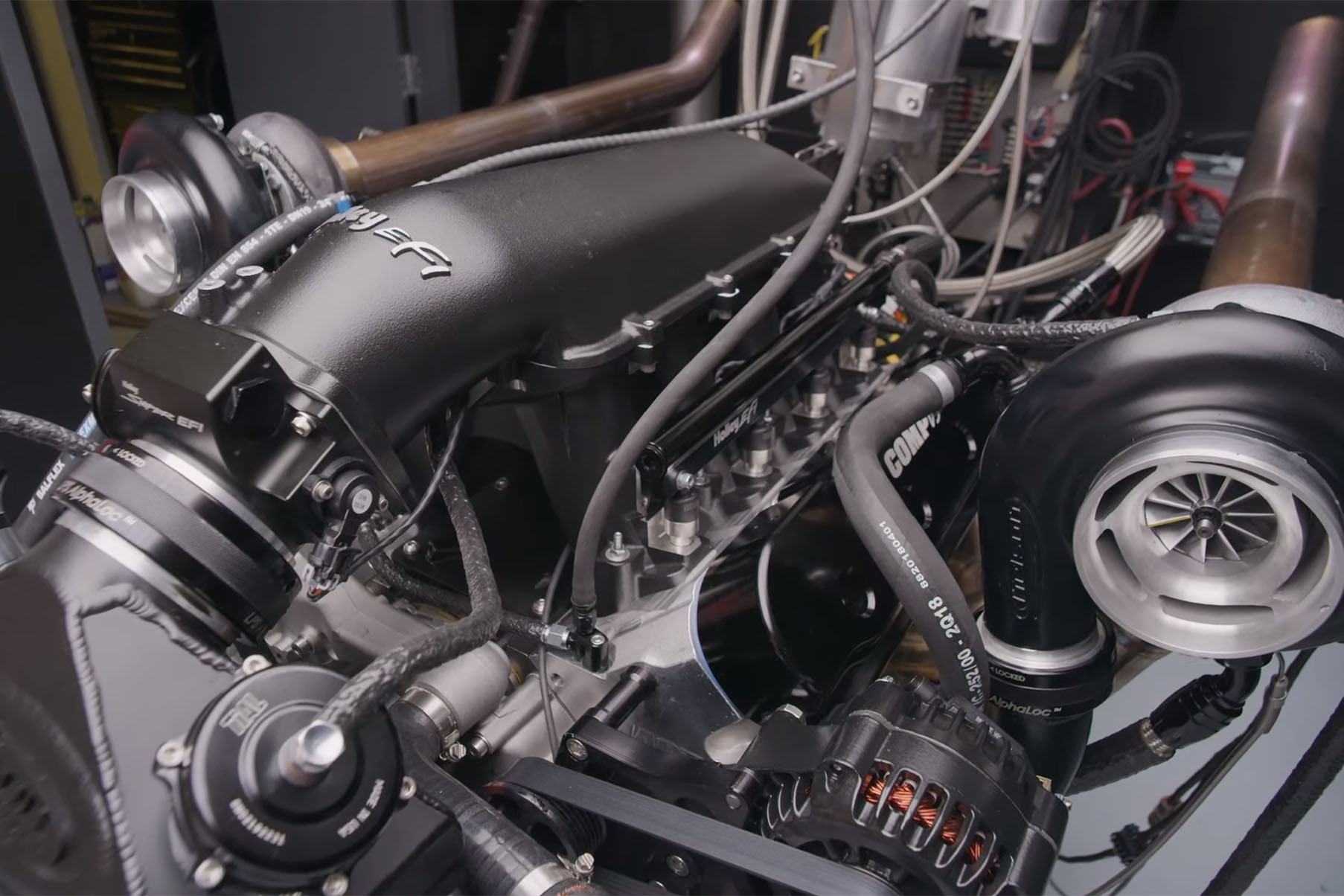 Nelson Racing Engines proves big things come in small, reliable packages. This 260ci LS engine may not displace much in the way of cubic inches, but with twin NRE turbos it makes a ton of power.

For the past two decades, Nelson Racing Engines has been building some of the most potent high-horsepower mills you’ll find anywhere. The Chatsworth, California-based outfit initially got the ball rolling by working on a little bit of everything, but it wasn’t long before they honed in on their areas of expertise.

“One of the main players for us back in the day was off-shore race boats,” says shop founder Tom Nelson. “In the beginning we were building a lot of blown big blocks for those, but we when started doing more big turbo setups, we noticed that those were much more reliable and powerful. I decided I wanted to bring that to the automotive side, so that’s when we started doing twin turbocharged setups for street cars.”

While they’re still building all sorts of different high performance setups – from high-winding, naturally aspirated road race builds to blown, big-cube drag strip bruisers – Nelson Racing Engines has become one of the go-to performance houses for serious turbocharged builds. And when you look at their latest creation, it’s not hard to see why.

“This one was built for a river race boat,” Nelson explains. “In that racing series, the rule set allows you 470 cubic inches if the engine is naturally aspirated, or 260ci if there’s turbos.” In the past, competitors have invariably chosen the former to ensure the engine could withstand the extended full-throttle abuse of the racing format, but Nelson and his team decided to choose the latter, pairing a small-displacement LSX block with a burly twin-turbo setup.

“As far as we knew, nobody had done that before,” he says. “And we felt confident we could make more power with this setup while maintaining the reliability they would need.”

But with horsepower reaching well into four-digit territory in a boat that would be going flat-out for more than half an hour at a time, the team had to employ some clever strategies to make sure the LS, and its internals, were up to the task.

“We had JE Pistons put together a custom piston to withstand this level of boost,” Nelson says. “The piston was really designed for strength rather than light weight, so the crown thickness is .330” whereas on a normal turbo piston it’s around .200”, and that’s going to help it withstand the heat that this thing’s going to see.” Nelson matched up that piston with an H13 tool steel pin and adapted a big block Chevy connecting rod to the LS mill to maximize the rotating assembly’s durability.

“We’ve always had great success with JE Pistons,” Nelson tells us. “In the past we’ve had issues with other company’s pistons – tolerances that didn’t match up with what we asked them to do – but JE always seems to get it right. The majority of the pistons we use are custom spec, and that really hasn’t been much of an issue because their turnaround on custom designs is pretty quick.”

The block itself has a few tricks of its own, too. “We drilled through the main oil galley and adapted jets that will shoot oil on the bottom of the pistons,” Nelson tells us. “That’s going to help keep everything alive at the temperatures those pistons will see.” NRE also cut grooves around each cylinder and embedded stainless piano wire in those grooves to provide additional pressure for sealing on the head gaskets.

Proper oiling will be crucial as well, so Nelson equipped the LS with an all-billet dry sump system from Daily Engineering that features a trick pan design with scavenge areas for each main, and cavities for the oil to pass through so that the lines between the pan and the pump could be eliminated from the design. Nelson Racing also added and air/oil separator to the back of the pump assembly itself, which prevents frothed-up oil from being sent back into the engine. “Air isn’t a very good lubricant,” Nelson points out. “And I think that’s going to make a huge difference in terms of how this thing will live over a long time.”

To test the durability of the new LS mill, the team hooked it up to the dyno and ran it flat out at over 7,000 rpm for five minutes straight. Twelve times! “That boat will run flat-out for 38 minutes at a time, ten times in a row,” says Nelson. “It’s just always wide open. But we got it to live, and that was the real challenge here – getting components like this to live in that kind of environment.”

So what’s next for Nelson Racing Engines? As you might imagine, there’s always a killer build in the hopper. “We’re working on a twin turbo Lamborghini Diablo right now,” Nelson says. “And then there’s the twin 106mm turbo, 700 cubic-inch big block. It’s bound for a tube chassis race car. That’ll probably be, like, five thousand horsepower.”