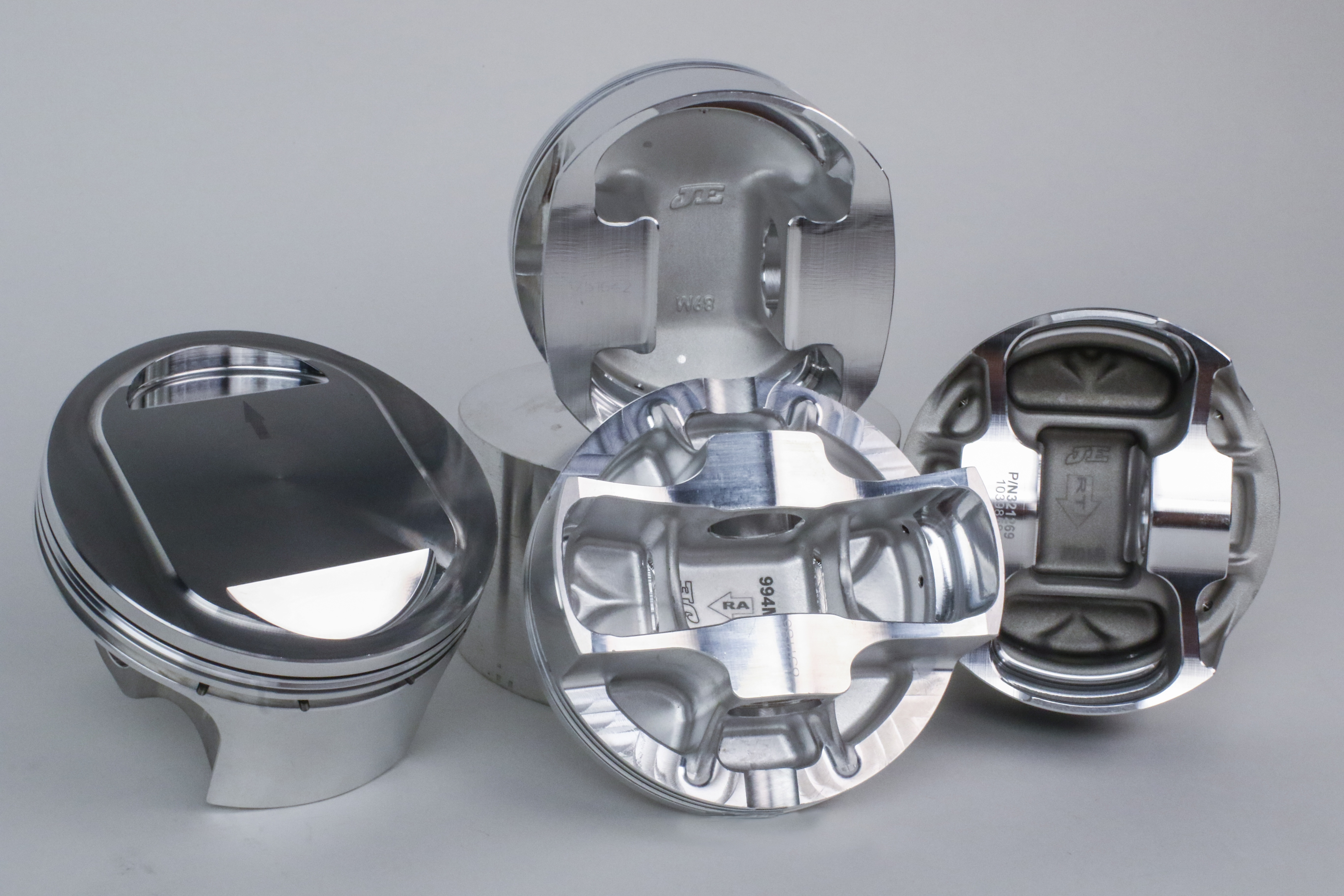 A Reference Guide to JE Powersports Piston and Ring Markings

Powersports is an industry full of a wide variety of machines, from dirt bikes, to UTVs, to personal watercraft. Each engine in each category is different, requiring unique piston engineering and design. Pistons have evolved well beyond machining a seemingly-round piece of metal and drilling a hole and some grooves in it. Some Powersports feature technical characteristics, such as offset pins and symmetrical valve pockets. Because of these many features, the JE team uses a glossary of markings on their pistons and rings, to help both the JE team internally during manufacturing, and the customer. The markings and their explanations have been compiled here into a reference guide.

You’ll find the JE logo forged-into or laser-etched underneath the crown of every JE piston manufactured since 2004. In most cases, this logo is placed on the same side as the exhaust valve pockets. However, note that this is not always the case. If there is an “INT” or “EXH” laser marking on the crown indicating which valve pockets are which, always follow these markings, and don’t assume the JE logo is on the exhaust side.

This number ONLY identifies the raw forging that was used to manufacture the piston. A large variety of bore sizes, compression heights and other design features can be applied to a single forging. A part number or job number is needed to get information or to be able to order pistons. Forging numbers cannot be used to provide information.

On off-the-shelf catalog pistons, the part number is a 6-digit number identifying the specific application the piston is for. You can use this number to re-order pistons, or identify what the pistons you have are for. You will not find this number on custom pistons.

Job numbers are found on both custom and shelf pistons. This is a 6 or 7-digit number, and can be used to assist in reordering, identify what the piston was designed for, and aid in locating replacement components, such as wrist pins, locks, and rings.

If your pistons were designed with offset pins, there will be a laser marking underneath the crown of the pistons indicating the direction of the offset. The marking is an arrow, with either “LT,” “RA,” “LA,” or “RT” marked inside it.

Your pistons may have a laser marking on the crown spelling “INT” or “EXH.” INT stands for intake, and EXH stands for exhaust. These markings indicate which valve pockets correspond with either the intake or exhaust valves. For example, if INT is marked on one side of the piston, that indicates the piston should be installed so the valve pockets on that side of the piston are in-line with the intake valves. These markings are commonly used in piston designs featuring symmetrical valve pockets, because there is no size difference in the valve reliefs to allow for easy delineation between intake and exhaust valve pockets.

Depending on the engine model, some Harley Davidson pistons have standard features, and some have offset pins and symmetrical valve pockets. Depending on what pistons you have, you may have “FRONT CYL.” laser marked on one piston and “REAR CYL.” laser marked on the other. These indicate which cylinder each piston should be installed in. Front and rear are referred to as the front cylinder is closest to the front wheel, and the rear cylinder is closest to the rear wheel.

You may also have an arrow laser marked on the crowns of your Harley pistons. These arrows should point to the front of the engine when installed.

On JE custom jobs with a critical status, there will be a small dot on the crown of the piston. This is simply a result of a hardness test, to be sure surface hardness is up to standards. This is not a marking to identify valves, determine direction, or anything involved with installing the piston. If you are the final installer, you can disregard this marking, because it has passed the hardness test, and has no meaning beyond that.

The Kawasaki Brute Force and Teryx pistons are a special case in JE Powersports pistons. These pistons have symmetrical pockets and an offset pin, potentially making it difficult for the installer to delineate intake and exhaust. For this reason, you will find an “F” laser-etched on the crown of the piston. The “F” stands for front, so when installed in the engine, make sure the “F” on both pistons is facing the front of the engine. The “F” will line up with the exhaust valves on the front cylinder, and the intake valves on the rear cylinder.

Markings you find on rings will usually be on the top and second rings. The types of markings on these rings vary by application, but the side the marking is on should always face up when installed on the piston. Here’s some examples of markings you may find on JE Powersports rings.